Give Windows 8 Another Chance

Over the last year, I’ve heard a lot of positive and negative feedback about Windows 8.  Personally I like Windows 8, even though it’s far from perfect. Microsoft has a rocky road ahead of itself but the direction they are trying to take I think is ultimately the best one.  I have, however, run into plenty of people that have nothing positive to say about Windows 8 – in particular the new “Start Screen”. It seems to me that some of these people just need a little help to get over the learning curve and with the Windows 8.1 update right around the corner now’s as good a time as any.  So here are a few pointers to help you give Windows 8 the best chance to shine for you:

Believe it or not, I have met very few people (honestly I can think of two) that have not grown to like Windows 8 after giving it a fair chance.  It is clearly a much more dramatic upgrade for users because it’s so different, but if you try to keep an open mind it can actually help you get things done faster and more efficiently.  The main issue seems to be that unlike previous versions of Windows (that may take an evening of playing around to get to know the differences), Windows 8 took me a good week of playing with it to learn all of the little tricks that I outline below. Even now I am still picking up little tips months later.

And obviously finding that kind of time is easier said than done, especially in the workplace, where you may not have time to spend a week playing with the new interface and figuring out how to get the most out of it.  However, if you can find the time and have the patience to learn it, you will probably find it more intuitive to use than the old Start Button/menu. 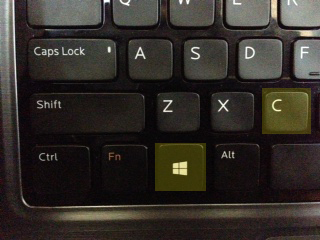 This seems to be a little known keyboard shortcut that will bring up the “Charms”.  On my Surface Pro tablet it was very natural to swipe in from the right side of the screen to get the Charms to appear, but when using a mouse it can be clumsy to move your mouse to one of the right corners and wait for the charms to appear.  In that scenario you likely have a keyboard (otherwise you’d have a touch screen and it wouldn’t be an issue), so hit “Windows + C” and the Charms immediately appear.  It seems like a little thing, but learning that made interacting with the Charms on my non-touch systems much smoother.

One major criticism of Windows 8 has been the removal of the familiar “Start Button”.  I think one reason people were so against this (myself included) is because we are so focused on using a mouse to interact with Windows, and like the Charms tip above, moving the mouse to the lower left corner is not the most convenient way to get to the start screen.  In particular, if you have multiple monitors trying to get your mouse in the lower left corner of one screen without moving over to the next can be quite a challenge.  The solution to this is simply to rely more heavily on the Windows key on your keyboard (you know that little key on the bottom of your keyboard that you may not have even known existed).

Microsoft has re-introduced the Start Button with the 8.1 update, so if you are still accustomed to using a mouse and don’t want to use the keyboard, you can.  It is not the Start Menu that so many were hoping would return, but if you use the Start Screen properly I think you’ll find it not as bad as many like to make it out to be. And given the following tips on how to take better advantage of the start screen, you may find yourself not missing the Start Menu.

Another thing a lot of people don’t realize is how easy it is to find apps in the start screen.  If you aren’t sure where you put your app or if it’s an app that you don’t use often, just hit the Windows key and start typing.  Windows will start searching for apps right away without you needing to do anything.

This is one area that Microsoft made great improvements in for the Windows 8.1 update.  The search feature that launched with Windows 8 was ok but it was sometimes a little difficult to find system level things like control panel items.  For example if you search for “Even Viewer” it wouldn’t appear right away, you had to use the “Settings” filter unless you knew that the exact executable was “eventvwr”.  In the 8.1 update Microsoft has streamlined this by removing the unneeded refinements for “Settings” and “Files” always searching now for everything which I find much more intuitive and more in line with how the search in the start menu used to work.

I rarely need to look for something beyond searching as long as I have some idea of what it’s called.  This, combined with the more intuitive access to the “All Apps” list from the Start Screen, means I rarely have issues finding what I need quickly.  Like everything I can still see some room for improvement but all in all I’m happy with how it is evolving.

How to use the Start Screen

Clearly the most controversial feature in Windows 8 is the Start Screen; for better or worse we have all gotten used to the Start Button and the Start Menu since Windows 95, when it first came out.  I’m not going to debate if the decision to migrate to the Start Screen was good or bad (because that could be a full blog article by itself), but Microsoft felt it was time for a change, so I strove to figure out the best way to adapt to the new Start Screen. All in all I do like it better now.

The key to the Start Screen is it is a “start” screen, emphasis on start.  It is not meant to be a place to have a tile for absolutely every app on your system (unless you happen to only have 10 apps installed – then it’s fine).  Only pin apps to the start screen that you use regularly, an email client like Outlook or a news app that you start every morning for example.  Similar to how you probably use your Windows desktop today, you have shortcuts for your most used apps and you browse the Start Menu for things that you use less frequently.

You may be thinking that this is a waste; why not just put the icons on the desktop like I’ve always done and skip this new screen? The advantage of the Start Screen is the “Live Tiles”, so you can start your system up and email or news apps can display messages on the tiles to let you know what app you need to start first.  Maybe a breaking news story just hit or an email from your boss needs immediate attention.  Using the old way, you may open one app not realizing that there is something more important that you should be paying attention to first.  Now with my example of only two apps, email and news, you may say just open both apps at once. However, as more and more app providers start taking advantage of Live Tiles, you could have several tiles that you quickly review before choosing which one needs your attention first.  It will take time before this vision is fully realized, but there are constantly more and more apps in the Windows marketplace. Unlike day one when Windows 8 came out and the Start Screen just looked like a static collection of colorful tiles, now it can be a wealth of information right at your fingertips.

I’m not saying that Windows 8 is perfect (I have several ideas of things Microsoft could do to improve it) but it definitely deserves either a look if you haven’t given it a chance yet or a second look if you were less than impressed the first time around.  There are plenty of things that I agree should still be improved in a later update, but all in all I feel Microsoft is going in the right direction.  If you gave it a look before and weren’t happy, I urge you to keep the above tips in mind and give it another try with Windows 8.1.  I won’t deny it’s a big change, but in the end I’m happy now that I’m accustomed to the new interface; hopefully you will be too!

Window 8.1Windows 8
Prev Give Windows 8 Another Chance
Next What the heck is Hekaton and why is it important?