During my consulting career, I’ve seen many large enterprises in the middle of “Agile Transformations.” Many of these enterprises can never get out of their own way to have successful transformation. Why? Because on the ground level, employees aren’t ready for a change. Case in point: I once heard a main project stakeholder declare during a program roadmap meeting that “backlog is a place where things go to die.”

To be successful with Agile, you must have the correct mindset and always be mindful of constant change.

Agile is, at its core, a set of principles that require you to collaborate, be flexible, and trust others. It ultimately leads to successfully delivering something of value to the enterprise.

This highly collaborative, effective environment doesn’t come easy without mindfulness, a state when you are self-aware of your thoughts, emotions, and actions. A team that is self-aware can communicate effectively and efficiently, support each other in times of stress, and can be creative in times of need. Individually, mindfulness has many benefits including better stress management for increased performance, and improved listening skills for optimal awareness and handling conflict. Meditation is a powerful tool that can be used to train your brain to achieve this state.

The Yerkes-Donson law as described in the image below, states that for a simple task, an individual’s performance increases with an increasing state of arousal. However, when a task becomes more complicated, the arousal level is better left at a lower level to achieve higher performance. 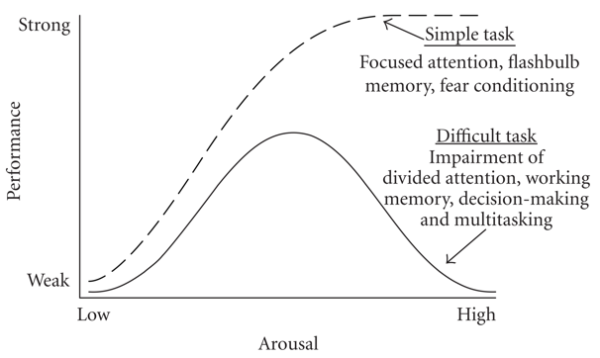 To achieve this lower level of arousal in a stressed state, meditation can be used to condition the mind in times of anxiety, to bring about focus and attention to the task at hand. Whether, you are a leader making a critical decision or a developer trying to make a milestone date, conditioning the mind to not stress, rather manage the anxiety will lead to higher state of functioning and better agile teams.

Effective team collaboration between team members as discussed earlier is a balance between attention and awareness. If the mind is attentive and aware, when listening to your team members, the conversation will be beneficial to both parties. Awareness brings about focus on key details a team member may be speaking about and to maintain that focus throughout.

For example, during a stand-up, focus on listening to others, rather than figuring out what you’re going to say during your turn. Effective listening for the agile team can lead to team success.

Lastly, meditation also improves the ability to handle constructive conflict by conditioning your mind to avoid a “flight or fight” response. Be aware of your emotions to better understand everyone’s perspective. A supportive team is a key to agile success as they are not likely to pass blame, but rather to fix the situation together as a team.

Why You Need to Migrate .NET Applications to Containers
agileagile team management
Prev Why Agile Teams Use Mindfulness and Meditation to Train Their Brains
Next How to Customize the Nagios Docker Plugin to Help Monitor Your Infrastructure