A Seat at the Table for Women in Tech: Review of 2019 Grace Hopper Celebration

In this article, SPR’s Lynn Zeglin recaps our virtual viewing party of the 2019 Grace Hopper Celebration and shares her thoughts on the event that featured several young tech innovators.

Last month, if all had gone according to plan, I would have attended my first Grace Hopper Celebration (GHC). Unfortunately, all did not go as anticipated and I was unable to register for the conference before it sold out, despite trying the very moment registration opened.

So, if you don’t know who Grace Hopper was or why she is celebrated, read on!

A lifetime of learning

How the late Grace Hopper inspires today’s leaders in tech

Briefly, Grace Hopper was an American computer scientist and United States Navy rear admiral. She was one of the first programmers of IBM’s Harvard Mark I computer and a pioneer of computer programming, having invented one of the first linkers. She popularized the idea of machine-independent programming languages, which led to the development of COBOL, one of the earliest high-level programming languages still in use today. Her life story is pretty amazing (more on Wikipedia) and full of lots of firsts – a pioneer worth celebrating.

Grace Hopper passed away in 1992 at age 85, and in 1994, the very first Grace Hopper Celebration of Women in Computing was held, created by and for women in technology. There were 500 attendees that first year. Since then, the conference has grown to be the largest conference of its kind. This year's event boasted more than 25,000 attendees from 80+ countries. Most, but not all, attendees are women. 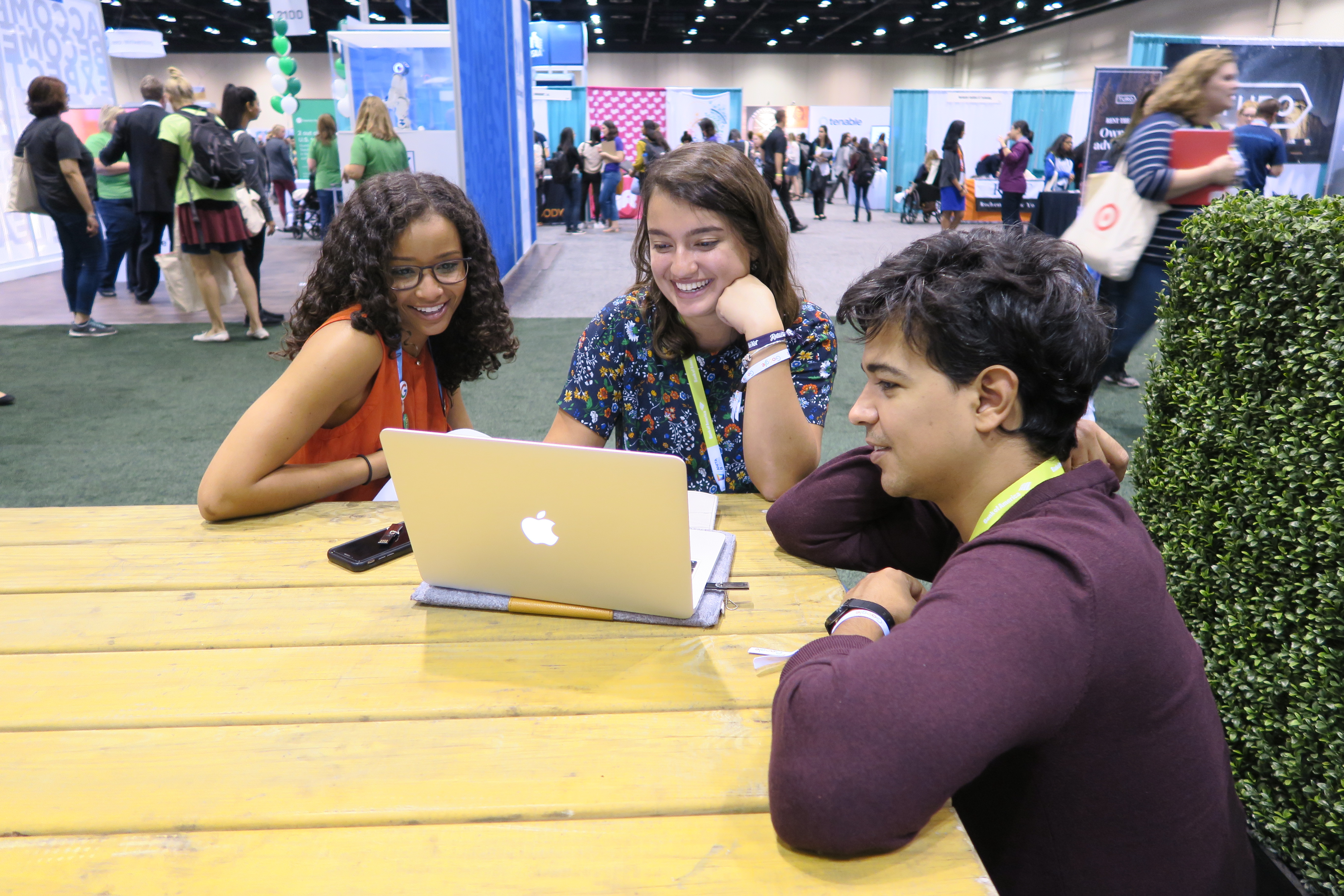 Inspiration for all: not just for women

The event is open to anyone interested in what it's like for women working in technology. Men are welcome and encouraged to attend, and many have. Some men have written about their experiences and I really enjoyed reading about them on Code Like a Girl and on code pointers. (First article tl;dr skip to the last 2 paragraphs.)

Up-and-coming tech leaders from across the globe

At our SPR viewing party, we watched the session "Building on Your Vision & Impact" (Student of Vision Award Winner Panel). Let’s break that down a bit.

Each year, one student is awarded an Abie Student of Vision Award, which honors young women who are committed to creating a future where the people who envision and build technology mirror the people for whom they build it. The winners are presented their award at GHC and are receive expenses-paid attendance. The panel included the four winners from the current and previous three years. I was inspired by these young award winners and what they have done in their first 20 or so years on this planet. Here is a brief synopsis of their accomplishments:

The 2016 award winner, Alyssia Jovellanos, began by creating tools and content to teach elementary students how to code. Alyssia came from a high school that did not offer computer science classes and was the only girl in her entire 350-student graduating class who decided to pursue post-secondary education in computer science. This compelled her to find ways to create opportunities for and inspire and support girls and other underrepresented groups to consider careers in software. Alyssia also co-founded and co-directed DeltaHacks, Canada’s second largest student-run Hackathon for Change, which encourages student teams across Canada to create socially impactful hardware and software projects.

In 2017, the award was given to Mehul Smriti Raje. When Mehul began college, she noticed the 15% female student population in the computer science department. In an effort to change the ratio, she founded a Women Techmakers (Google backed) chapter in Manipal, India. Determined to help make the tech journey easier for other females, she also produced a YouTube series, The Spectacular Female, which chronicles the accomplishments of women in computer science as well as many other fields. She is currently a graduate student at Harvard working on building an emotionally intelligent system that can comprehend users’ thought processes and offer solutions to challenges in collaborating and communicating with others.

In 2018, the recipient of the award was Chiara Amisola, an undergraduate student of computer science and art at Yale University. Chiara is an activist, front-end developer, designer and founder born and raised in Manila, Philippines. To address the inaccessibility of technology in her own school and community while growing up, Chiara founded Developh, a club in her high school, which has grown from 40 students to a global nonprofit, impacting over 40,000 students across Manila and beyond. Chiara also co-founded Batid, an internationally recognized startup network of sociopolitical applications rooted in digital humanitarianism and designed to move and alert communities. Chiara heavily values creating technology for social good.

Broadening impact and workplace opportunities for people with autism

This year’s winner is Jhillika Kumar, an undergraduate student at Georgia Tech, UX Design intern at Anthem, and founder of AxisAbility, which seeks to improve the lives of the differently abled. Through interviewing autism self-advocates, she learned that one of the biggest struggles for this group is finding jobs that can accommodate the individual’s interests, strengths, capabilities, and sensory and emotional needs. Her company seeks to use technology to enable such individuals, who make up a significant and rapidly increasing portion of the population, to thrive – not only in workplaces, but in classrooms, society and in their lives overall. In her words, “Imagine how many doors we can open if we combine technical capabilities with empathy for those who differ from us.”

Technology enables positive impact in the lives of others

These women saw issues of unequal access and opportunity, and they immediately began to work toward making positive impacts. They started making changes in small ways. As they learned more about the problems they sought to address and the people they hoped to help, they refined their visions and furthered their reach, adapting to situations as they evolved. These women, as technologists, are actively engaged in problem solving and critical thinking. They are debugging their lives and the lives of those around them and engineering unique solutions, rearchitecting as needed.

The world is full of meaningful problems to solve, and it’s probably safe to say there are more problems than there are qualified people to work on those problems. It’s basic math: the more problem-solvers there are, the more problems we can solve, right? By failing to introduce, educate, recruit, and support women in the field of technology, we limit our capacity for solving problems and fail to nurture and develop a significant portion of potential problem solvers.

One thing I learned from listening to these young women is the issue of gender ratio imbalance, between those who build technology and those who use it, exists worldwide. I am extremely grateful for the increasing awareness around this issue and have seen some positive change over the years. At the same time, I look forward to a future where women-in-tech becomes the status quo and we don’t need to talk about it anymore. If that’s going to happen in my lifetime, there is still a lot of work to be done. We should all be asking ourselves the question: “What would it be like if the gender ratio of technology builders was representative of the world’s population?”

A seat at the table for future inspiration and impact

Although I was unable to attend GHC in person this year, I still felt and was and inspired by the infectious energy and excitement of the event. The 2020 Grace Hopper Celebration is set for Sept. 29 – Oct. 2 in Orlando, Fla., and I’m crossing my fingers I will secure next year’s registration the traditional way. For women, I think it would be the biggest women-in-tech group hug ever. For men, I imagine it might influence your perspective and thoughts about women-in-tech in the best possible way. Care to join me? 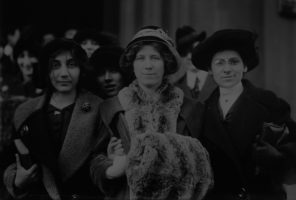 Ada Lovelace Goes on Tour to Meet Women in Technology
Prev A Seat at the Table for Women in Tech: Review of 2019 Grace Hopper Celebration
Next The SPR Future Leaders Program—Developing Leadership from Within