Thanks to a recent Azure Databricks project, I’ve gained insight into some of the configuration components, issues and key elements of the platform. Let’s take a look at this project to give you some insight into successfully developing, testing, and deploying artifacts and executing models.

One note: This post is not meant to be an exhaustive look into all the issues and required Databricks elements. Instead, let’s focus on a custom Python script I developed to automate model/Job execution using the Databricks Jobs REST APIs. The script will be deployed to extend the functionality of the current CICD pipeline.

Background of the Databricks project

I’ve been involved in an Azure Databricks project for a few months now. The objective was to investigate the Databricks platform and determine best practice configuration and recommendations that will enable the client to successfully migrate and execute their machine learning models.

We started with a proof of concept phase to demonstrate some of the features and capabilities of the Databricks platform, then moved on to a Pilot phase.

The objective of the Pilot phase was to migrate the execution of machine learning models and their datasets from the Azure HDInsight and Apache Hive platform to Azure Databricks and Spark SQL. A few cons with the HDInsight platform had become obvious, some of which included:

a) Huge administrative overhead and time to configure and provision HDInsight clusters which can run into hours.
b) Limitations in managing the state of HDInsight Clusters, which can’t really be shut down without deleting the cluster. The autoscaling and auto-termination features in Azure Databricks play a big role in cost control and overall Cluster management.
c) Model execution times are considerably longer on Azure HDInsight than on Azure Databricks.

Some of the issues faced are related to:

Other Databricks elements and tools include:

Databricks Jobs are the mechanism to submit Spark application code for execution on the Databricks Cluster. In this Custom script, I use standard and third-party python libraries to create https request headers and message data and configure the Databricks token on the build server. It also checks for the existence of specific DBFS-based folders/files and Databricks workspace directories and notebooks. It will delete them if necessary while creating required folders, copy existing artifacts and cluster init scripts for custom package installation on the Databricks Cluster, and create and submit a Databricks Job using the REST APIs and execute/run the job.

Let’s look at specific parts of the Python script.


Create and run the job using the Python subprocess module that calls the databricks-cli external tool:

The actual Job task is executed as a notebook task as defined in the Job json file. The notebook task which contains sample PySpark ETL code, was used in order to demonstrate the preferred method for running an R based model at this time. The following Job tasks are currently supported in Databricks: notebook_task, spark_jar_task, spark_python_task, spark_submit_task. None of the defined tasks can be used to run R based code/model except the notebook_task. The spark_submit_task accepts --jars and --py-files to add Java and Python libraries, but not R packages which are packaged as “tar.gzip” files.

In the custom functions, I used the subprocess python module in combination with the databricks-cli tool to copy the artifacts to the remote Databricks workspace. The Create Jobs API was used instead of the Runs-Submit API because the former makes the Spark UI available after job completion, to view and investigate the job stages in the event of a failure. In addition, email notification is enabled using the Create Jobs REST API, which is not available with the Runs-Submit Jobs API. A screen shot of the Spark UI is attached: 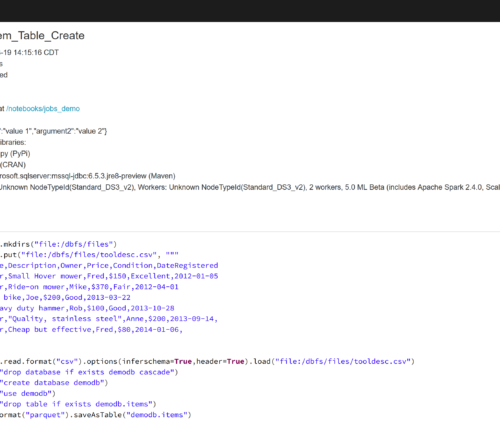 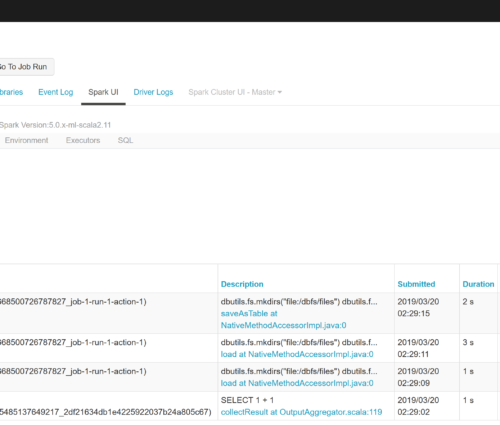 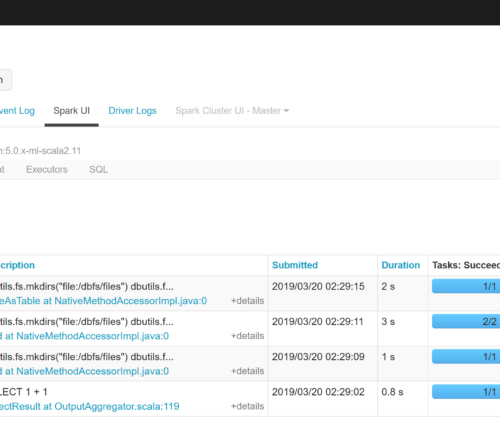 A snippet of the JSON request code for the job showing the notebook_task section is as follows:


I developed this Python script to extend the existing features of a CICD pipeline for Azure Databricks. I’m continuously updating it to take advantage of new features being introduced into the Azure Databricks ecosystem and possibly integrate it with tools still in development. That could potentially improve the end-to-end Azure Databricks/Machine learning workflow.

The complete code can be found here.