Skip to content
Shifting for Unusual Times
We gathered insights from our digital technology experts on what they are experiencing during this time of uncertainty.
See the Insights

Day at the (3D) Races for LEARN Charter Scholars

In our world, technology never sleeps. It just keeps changing – morphing into something new and generally more fantastic.  Consider 3D printing, an emerging technology that uses various processes to synthesize three-dimensional objects. Some futurists believe that 3D printing signals the beginning of the 3rd Industrial Revolution due to its vast application potential. As an example, in 2014, NASA conducted a technology presentation by transmitting a design file from the ground to a 3D printer on the International Space Station. Within four hours, the printer had created a functioning ratchet wrench. Needless to say, there’s no shipping service that delivers in space, so the ability to ‘manufacture’ needed objects onsite via a 3D printer represents huge possibilities. 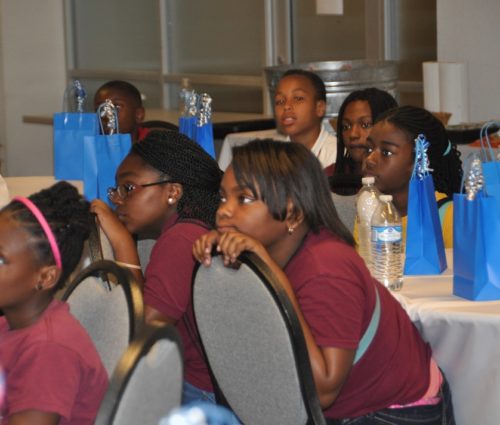 To expose young minds to this promising technology, SPR hosted more than thirty 4th and 5th graders from the LEARN Charter School Network, a high performing collective of college preparatory, tuition-free public elementary and middle schools that serves 3900 Chicago and North Chicago children. The kids’ champion, educator Lamon Phillips, was hoping for a transformative experience for his scholars. He calls them scholars to inspire them to define themselves and actively pursue the ideal. His goal was to create a field trip, something beyond the norm of museums and planetariums that would, “give them an opportunity to see how technology impacts the world at a large scale and plays a major part of our daily lives. Most important,” Phillips said, “I wanted them to use their minds, to think, work as a team and ask questions.”

To that end, he connected with Melanie Adcock, co-founder and president of Tech Month Chicago; a new volunteer-driven organization focused on bolstering the grass-roots tech community in Chicago. Immediately, she went to work seeking a tech firm that could help craft and execute the vision.  Of course, SPR was deeply interested in the project as the overarching idea fits right in with its robust civic engagement efforts. 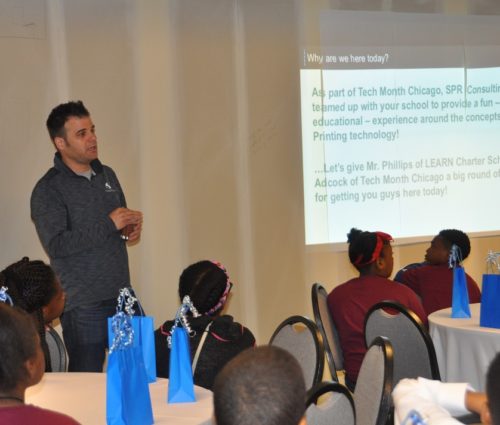 On event day, the young scholars traveled from the Westside of Chicago to the heart of downtown, then all the way up to the 35th floor of Willis Tower.  The elevator ride set the tone for a thrilling expedition, as none of the children had ever seen or been to the tower before; all part and parcel of Phillips’ mission to expand their views of the world. They entered the gleaming offices, openly excited, and were greeted by an equally enthusiastic group of SPR employees led by Matthew Mead, Chief Technology Officer, who constructed the nuts and bolts of the project.

The kids were given lanyards to identify each child and create an air of official-ness; then the teams were organized according to how they sit in the classroom.  During the hands-on introduction to 3D printing, Matt shared how 3D printers are being used to create prosthetic hands for those in need and passed around an actual 3D printed hand to demonstrate.  This portion of the exercise revealed wide-eyes all around, as the concept of 3D printing was decidedly foreign, and these kids wanted to understand how the printer could create something so valuable and incredible from a spool of plastic PLA filament. The students were super-engaged, asked lots of relevant questions and exceptionally represented their school and its mission. To further inspire and engage the scholars, a race (similar to the storied Pinewood Derby) was the key activity of the day. The plan? Take the concept of 3D printing and use it to have some fun!

Let’s get ready to rumble! 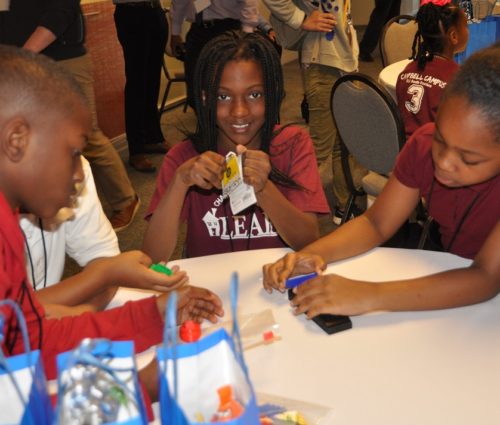 A huge cache of 3D printed car parts, bagged separately for each team, were provided; and the young scholars plunged into assembling their racers from various bodies, wheels and axles. Since numerous colors of PLA (a plant-based plastic with a lower melting point) were used, the car fragments were vibrant and interesting. To help make the exercise more familiar, the parts attached easily using Lego connections and the kids eagerly built and refined the racers they hoped would yield victory. 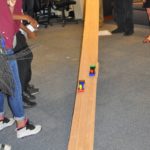 The races began, two teams at a time, and the decibel level at SPR rose to an enlivened pitch.  These kids were geeked. The young scholars cheered and screamed for their tiny cars as the small bits of extruded plastic zoomed down the track barreling towards the finish line. The competition was fierce, to say the least, and the entire space was infused with high-octane energy. Once all teams had run their best races, the two winning vehicles were chosen. Each team received a mini-trophy, 3D printed of course, so everyone could get a taste of what winning was like. While there was some agony associated with defeat, the thrill of victory ruled the day.

Adcock reflected, “SPR’s excellent work sets the example and paves the way so that many Chicago area students can be paired with tech-related companies for hands on field trips. This program and others like it are part of Tech Month Chicago’s extended vision to build a bridge between industry and community, fostering long term economic development.”

SPR’s first ever 3D Derby for LEARN Charter Schools Network will go down in the record books as an extraordinary happening. Everyone involved (from the wide-eyed, open-minded scholars to the passionate, whole-hearted adults) experienced a thrilling and awe-inspiring day at the races!